It had rained a bit over the weekend. I was on my way home about an hour before sunset. The rain stopped and the last of the daylight glistened across the sky. As I turned on to the final road before home, I noticed about six or seven cars pulled over to the side. I was confused about the roadside get together and drove past them. Then I realized what they were doing. On the horizon was a vibrant rainbow, a small chunk peeking through the clouds. 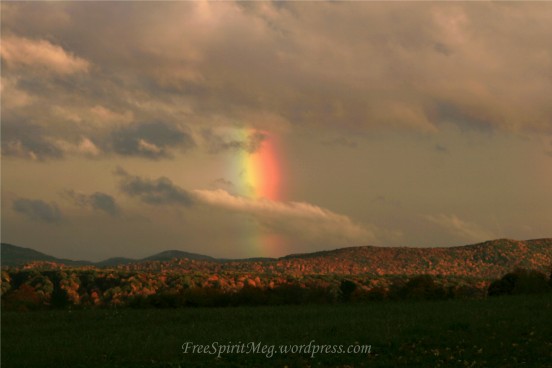 I drove further up the road from the other spectators and got a look at the rainbow through an old cemetery nearby, one of which I have photographed before. The rainbow seemed to appear from behind one of the headstones (perhaps a message from beyond the grave). It was difficult to make out the name on the stone so I will have to do some digging and figure out whose it is. At the time, I was trying to get as many pictures as I could before the sun disappeared, taking the rainbow with it. I scrambled with my camera, attaching the lens and getting the proper filter on in a flash. I snapped the image of the headstone and climbed up the hill to get a landscape shot. I got about six pictures and once again, my inability to charge my battery after every use had gotten the best of me. My camera died. D@mn! At least I am lucky enough to live in the age of smartphones. I snapped the remaining images with my phone. 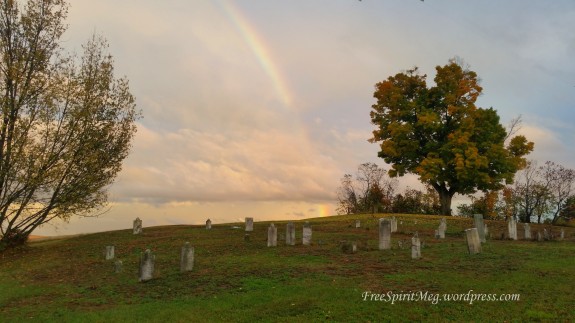 As the sun was setting, the rainbow grew and grew right before my eyes. It started as a small piece behind a cloud and grew into a giant arch across the sky. I also happened to get a shot that revealed a second rainbow. It was amazing to witness and was over as quickly as it began. Lucky me, I was there to get some pictures. 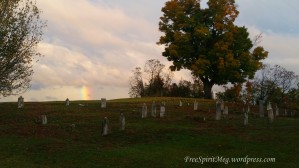 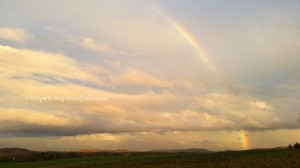 Were you somewhere over the rainbow? Possibly one of the other spectators on the side of the road? Leave a comment below and share your story. Thanks for reading!

“She’s like a rainbow coming, colors in the air.”

6 responses to “Beauty Comes and Goes”