For: Sudan and Northern White Rhinos 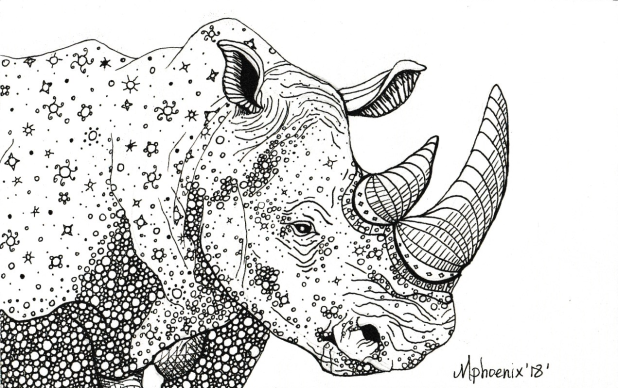 My newest totem animal piece is in honor of Sudan, the last male northern white rhinoceros. You may have heard that he died a few days ago from a leg infection and age related problems. There are only two northern white rhinos left, both older females. The western black rhino was declared extinct in 2013 and unfortunately the northern white is not far behind. Scientists are doing what they can to attempt the creation of a “science lab” offspring but any success in achieving such a feat is uncertain.

Extinction from natural causes can not be prevented but this sadly could have been. The northern white rhino, a subspecies of the southern white rhino, has arrived at such a fate due to poaching and loss of habitat. It is truly sad to know there is still so much negligence in the world. So many humans still believe they are truly superior to any other living creature. It’s sickening.

Please, animals are not here for our amusement. They are not here to decorate our homes. We do not need to wear them to look good. We do not need to kill them to slice off a horn, some skin, a skull, a lucky foot on a keychain….Seriously? Why? Stop spending money on this shit people! It is terrible, cruel, horribly selfish and ignorant.

…my latest piece was very calming to create (if you can believe it, haha) and I’m very happy with how it turned out. I still need to add the color but this will mostly be shading. I mean, it’s a white rhino so the color should be easy! This piece remained simple but sometimes that’s how it goes. It seems to work with this gentle giant’s demeanor. I will have a new totem animal post ready for Monday morning with the symbolism for Rhino.

Is there anything you’d like to add about Sedan or northern white rhinos? Share your thoughts in the comments below! Thanks for stopping by.

“Since the beginning of time, we have been the guardians and the healers of the forest. We have too long forgotten the magic powers of nature. The time has come to call on them again. Remember: all the magic of creation exists within a single tiny seed.”

Ending quote from the movie, Ferngully: The Last Rainforest

7 responses to “For: Sudan and Northern White Rhinos”