Have you ever met a dog that you swear just loved to get a rise out of you? For me, that was Dodger. It was a game to him to see how much it would take to annoy me. What do I expect? He was my father-in-law’s dog! When my family and I moved from Ohio to New York, we stayed with my in-laws until we could find our own place. I was able to get to know Dodger very well during our stay. He was an oinker, that’s for sure! The couch was his throne. He wouldn’t jump down for you if you wanted to sit. He wouldn’t move at all actually. “I was here first”, it seemed like he was saying if you tried to move him.

He was pretty lazy most of the time. With us bringing our two dogs in the house though, it gave him something to do. They would wrestle and run around outside.

Dodger had a hard time keeping up though. He wasn’t the fastest seeing how he had broken his leg before the humane society found him, where my in-laws got him from. It never healed right so he kind of hobbled around like he had a peg leg. They should have dressed him up as a pirate for Halloween! That would have been awesome! Anyways….the drawing I did was a classic pose for him. He had to stick that peg leg out when he sat down because it wouldn’t bend properly.

You would have never guessed he had a bum leg though if you left the garage door open when you let him out.  I’ve had to chase that dog down the street so many times I can’t even count. If we didn’t notice right away, he would usually find a neighbor or another dog outside and go chill with them, until we realized he was gone. One time we were looking for him for 45 minutes. Come to find out he was at the neighbors across the street hanging out in the backyard. They gave him water, food, attention! Why wouldn’t he want to take a stroll through town? It’s a town of dog lovers!

Yea…Dodger and I have shared some words in the past! He knew my buttons and he would push every one of them. Then he would snuggle up to me on the couch and kiss ass until I forgave him. Jerk. But then he did something that I couldn’t forgive for the longest time. I started working on this drawing of him. I would work on my art at the dining room table. It was a nice big space and I could leave my stuff out until dinner time so I could work on it through out the day. Bad idea.

There was no furniture safe from Dodger. He would jump in that chair and jump right on top of the table. Why? So he could see farther out the window and bark at that “killer lady” that walks down the road minding her own business! Yep…muddy paws all over my drawing. A few indented scratches from his claws. I was about half way done with the drawing and he friggin’ gets mud all over it. My immediate thought, “I @&*$# hate this dog!”

I tried so hard to get the mud prints off my picture. I tried erasing them. I tried thinking of ways to cover it up. Nothing was working. I was furious. Well that’s it! I can’t work on this picture anymore with out being mad at that damn dog. So it got tucked away for a loooooong time. No like a really long time. I actually had forgotten I started it a couple times. 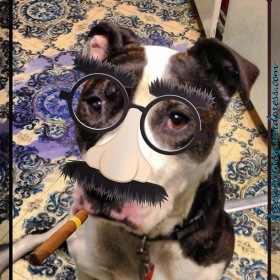 Now don’t get me wrong, Dodger was a great family dog. My son spent a lot of his toddler years pouncing on that dog, laying on him, patting his head maybe a bit too hard and Dodger took it all. 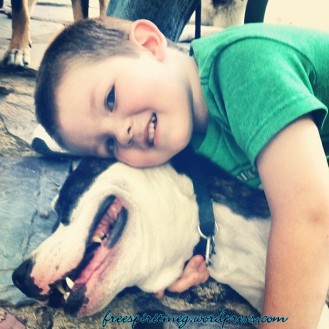 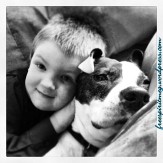 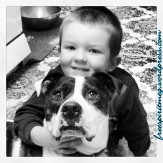 He never grumbled, growled, whined or complained. My son was allowed to do whatever he wanted. Luckily for Dodger, my son adored him and treated him like a best friend. He taught my son what a real “man’s best friend” should be. The uncontrollable slobbery kisses in his face were a constant reminder. I couldn’t really hate a dog that was so good with him.

Another lesson Dodger taught my son was the loss of a pet. Dodger passed away this past year. Of course, everyone was heart broken. Dodger had been in the family for a long time. He was always there, causing shenanigans, and then he wasn’t. It was odd at first. After a while though, it kind of felt like he never left. For me at least. I have so many memories with him it’s like I just saw him yesterday.

I started going through some unfinished projects I had and I came across the Dodger portrait again. I wasn’t mad about the mud anymore. I was actually happy about it. Now that he was gone, his paw prints were like his signature. A little piece of him to keep forever. I realized instead of trying to get rid of them, I had to make them part of the drawing. I stuck it back on the easel and had a new found desire to finish it. I wanted it to look good. And this time, I knew it could, even if it had a little mud on it. So if you were wondering about the random paw prints throughout the picture, now you know the rest of the story.

Dodger was a knuckle-head but all said and done, he was a good dog. R.I.P. buddy. 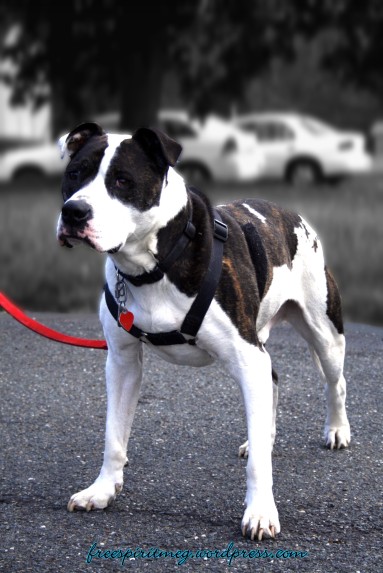